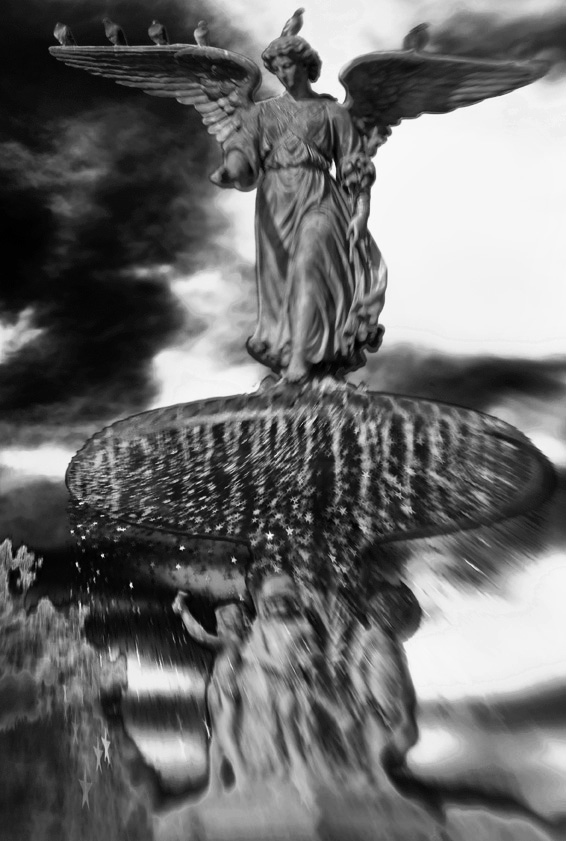 Capturing the AIDS epidemic in pictures and words

Some 37 years ago, on or around June 5, 1981, I was experiencing the magical white nights in a city now known as Saint Petersburg. I was only a kid at the time, and had no idea of the significance of that day. It took a few more years for me to hear the word “AIDS” for the first time in my life….

It’s funny how sometimes the universe nudges us on a certain path, toward a certain goal or cause. In my case, it did, and I’m glad that it happened, because I’ve got to meet many wonderful people along the way–the HIV warriors, HIV advocates. Their stories have impacted my life in a profound way, a good way.

One of the first “HIV warriors” I’ve met is award-winning photographer Kurt Weston. I got to write a book, Journeys Through Darkness: A Biography, about his photography and his journey through photography and through AIDS. One of my favorite photographs by Kurt Weston is called “Dark Angel.“ I found myself fascinated by its story, and also its symbolism.

Here’s an excerpt from Journeys Through Darkness that talks about the making of the “Dark Angel” photograph, as explained to me by the photographer:

As an artist, Kurt Weston has used art to express his own vision of the disease. One of his black-and-white photographs, “Dark Angel,” may best capture Weston’s first intimate experience with AIDS. The photograph is one of his first to be inspired by Angels in America, [the original] play.

In Western monotheistic religions, angels are pictured as God’s messengers, living among humans and in the transitional space between Heaven and Earth. They can be guardian angels helping humans throughout their physical life, or they can be angels of death, delivering the coming of death. The concept of angels and the symbolism of funeral rituals concur in the artist’s work, revisiting old concepts about life, death and the vast beyond that follows.

Kurt Weston’s Dark Angel is an angel of death. He is also an angel of AIDS, which, at the time, was a death sentence. Weston’s angel appears out of the shadows with his wings spread wide. The image shows an implied representation of the angel’s wings, which are basically the shadows from where he’s peering out.

Although the photograph is a mixture of poor light and shadows, the angel’s face is clearly illuminated because, even if AIDS symbolized the beginning of a terrifying death process, to the artist there’s also something trans-formative about the disease. Throughout the years AIDS has changed many people’s concepts about death and dying, and about how individuals celebrate their lives and how they honor their dead. [Hence, the funeral scene in the 2003 HBO movie, Angels in America.]

Before the arrival of the AIDS epidemic, many envisioned funerals as horrifying events where they would mourn and sob over an open casket. As the epidemic started to decimate the gay community and people started losing so many friends to the disease, funerals became more celebrations of life. And this transformation began to spread throughout the culture.

Weston’s Dark Angel symbolizes an angelic figure composed of a play of the elements often used in the artist’s work—darkness and light—to manifest the subtle interaction between what’s real and what is not. This interaction further transposes between the dark angel and the white cat that doesn’t seem afraid of the angel, but rather interested in his stake. The cat was actually “a happy mistake,” the artist says, explaining how he created the image.

Weston used a view camera, which is a large-format camera. He placed a sheet of film in a film holder, in the camera and had the subject pose, holding on to his stake, as he appears in the image.

The room was completely dark, as the photographer started walking around with a hand-held flash, popping the flash off in different angles to create different shadows surrounding the Dark Angel.

Unbeknownst to Weston, while he was moving around, working on his photograph, his cat, Che (from Che Guevara), walked into the room and was accidentally illuminated when the flash came off. Only during the developing process the photographer discovered the cat staring at the angel’s stake.

Although Kurt Weston created Dark Angel in total darkness, he also interjected light into the image only to illuminate the angel’s face. The light is a symbol of hope and of life’s triumph coming through the immense blackness of the (then) terrifying AIDS epidemic.

We’ve come a long way in the fight against AIDS, but the fight is not over yet, and we should not give up, we should never give up. We should learn to do that from the HIV activists.

Over the years, I’ve had the chance and honor to interview and photograph a few HIV advocates. Here are a few of them:

As always,  thanks for stopping by!