Using tight and wide shots to tell a visual story

When telling a visual story through more than one image, consider choosing various vantage points, various angles from where to photograph, to tell the entire story and capture details, as well as “the big picture.” While deciding what close-up and wide shots to include, also consider how to best tell the story in the most interesting and intriguing way.

A few things to consider when telling a visual story using more than one image:

– when deciding on what images (tight as well as wide shots) to include, think of the narrative, the story, and how to tell it in the most interesting and intriguing way

– consider including tight and wide shots

– tight shots reveal details, but not the entire subject, while wide shots do just the opposite

– use these details, these hints, to intrigue and interact with the audience, if possible

– tell the visual story one image at a time, revealing information one image as a time, offering viewers a puzzle they’re about to solve

Here are a few examples of close-ups and wide shots telling a story, capturing a particular subject.

For example, do you guess where I took the image posted below?

Those familiar with the Arizona Memorial at Pearl Harbor, Hawaii, might recognize it. Indeed, when I visited Pearl Harbor many years ago (the image is a #tbt), I noticed the flag against a very blue and clear sky. The frame, or half-frame, is part of the top of the memorial.

Also, here’s another detail shot of a subject that, at first sight, could be anywhere.

Again, those familiar with the Mighty MO, might recognize its deck.

Here’s a shot of the Arizona Memorial as seen from Mighty MO, in the background, a glimpse at Pearl Harbor and surrounding volcano craters: 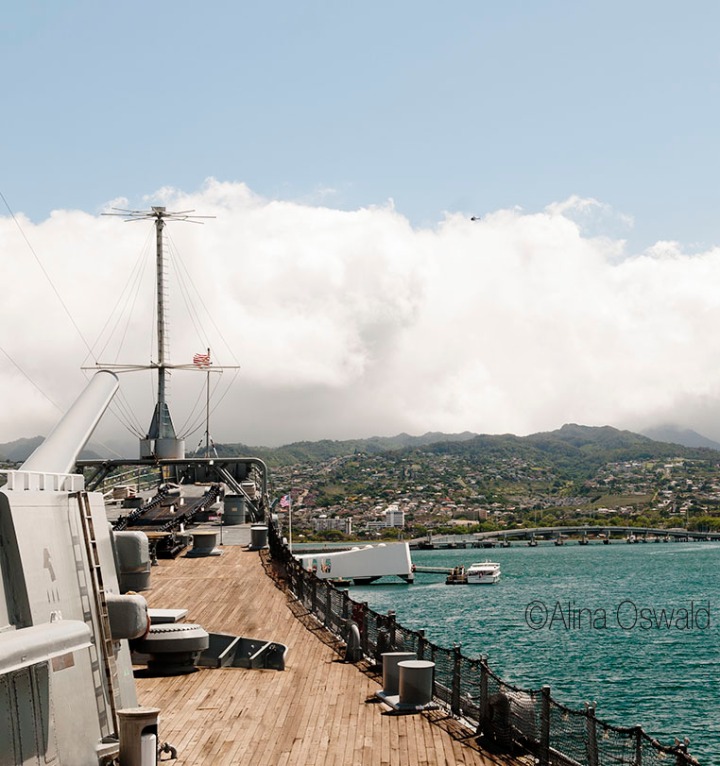 Here’s another detail shot, this time from inside the Arizona Memorial. Those not familiar with the place, might not recognize it or not recognize it right away, but there is a clue included here–it’s, I believe, pretty obvious that the image shows a memorial of some sort:

And here’s a wider shot from inside the Arizona Memorial:

And here’s a shot of USS Arizona anchor, with the Arizona Memorial and Mighty MO in the background:

So, how do we choose how tight or wide to shoot to tell the story? That depends on the story, the subject, the message we need to send out through that story. We can shoot tight, wide, and also capture the subject from unusual angles, offering, hopefully, a unique perspective, or use a combination of the above possibilities.

As always, thanks for stopping by.