As photographers, we are visual storytellers. We choose a point of view, vantage point or perspective from which to tell that story. A short, one-image story might require either an overall perspective (shoot with a wide angle lens to capture the entire scene, for example) or a tight shot, capturing a detail shot of the subject (hence, shoot with a telephoto lens or a macro lens, whichever the case, the subject, the story). Photo essays allow us to use different points of view, perspectives, vantage points to really…cover the entire story. That’s in particular important when shooting on location. After all, we don’t know if we get a second chance.

For those who might not know, Haleakala (“House of the Sun”) or the East Maui Volcano is a crater, and home for other smaller craters. One can capture capture the sunrise or sunset from above the clouds, from the top of Haleakala (or, if you’re lucky, to capture the rarely seen optical illusion known as the Brocken Spectre). To do that, one has to drive on a long, winding road in complete darkness, either on the way to the summit, to capture the sunrise, or on the way back, after viewing the sunset. But it’s all worth it. The ride is amazing all the way to the summit, from where the views are spectacular. Do bring warm clothes with you, though, to put on once the sun sets.

In a way, the aerial views of Haleakala, as seen from an open-door helicopter (my favorite activity while in Hawaii) are pretty similar to the views from Haleakala itself, from the top of the world, as I sometimes call it, at 10,000 feet above sea level.

Here’s an image of the Brocken spectre, a rare optical illusion, observed from the top of Haleakala, while on solid ground.

While waiting patiently for the Brocken spectre to appear, I was capturing over views of Haleakala. Here is a tighter image of the massive Haleakala crater, home to several smaller craters, partially covered by clouds. 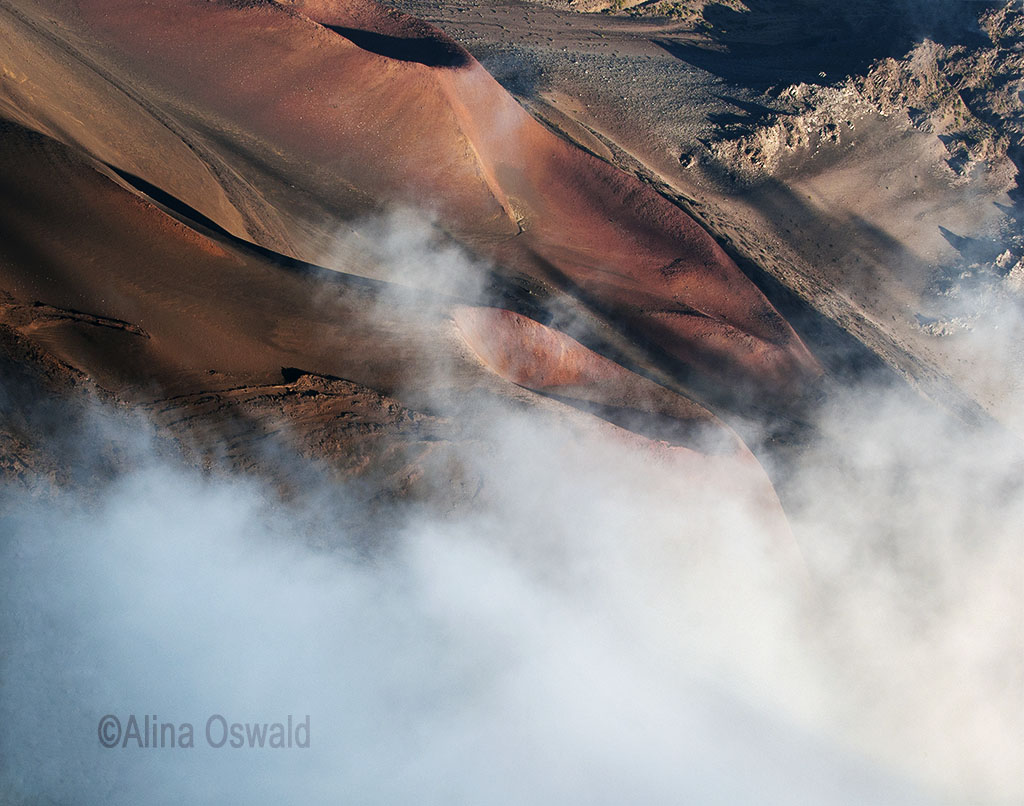 And here is a much tighter view of one of the above craters inside Haleakala, as the sun was about to set:

Here’s another shot of smaller craters inside Haleakala crater, and the pathways around them:

Adventurous tourists take horseback rides along those paths inside Haleakala, for a much closer look at the craters:

If you get the chance to visit Haleakala, drive up to the summit at night, to make there for the sunrise, or, like I did, drive later in the afternoon, to view the sunset from above the clouds. Here’s an image of the sunset as seen from the summit. Maui coastline is also visible. Too bad the sun was not covered, at least partially, by clouds. And so I waited. After all, as photographers, we have to be patient.

I waited until the sun reached the clouds.

One last look at the sunset light over Haleakala craters. 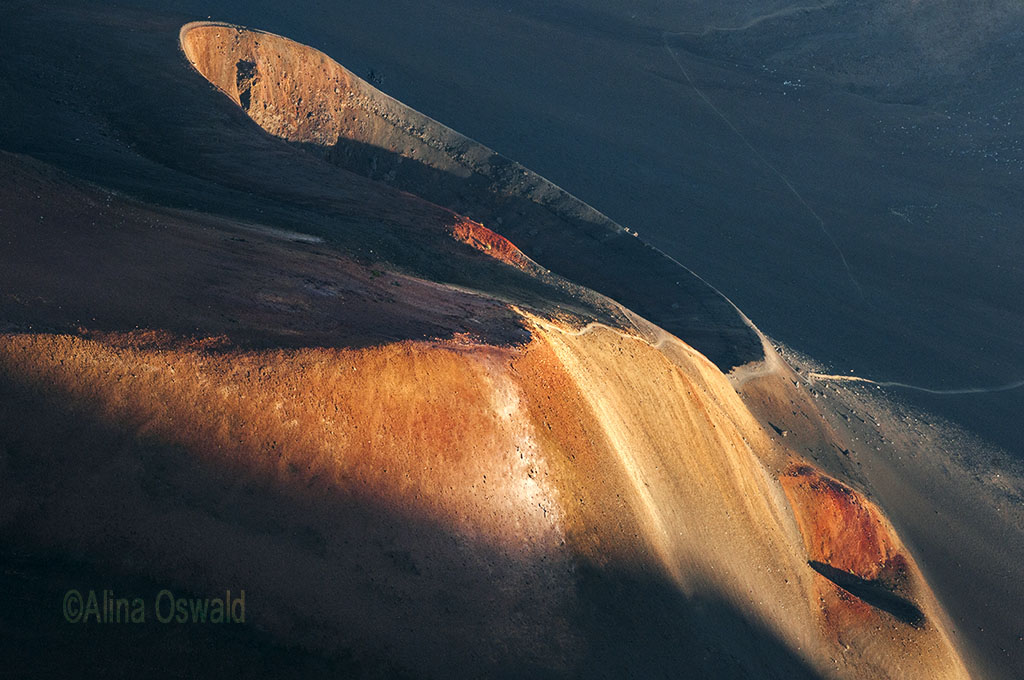 As always, thanks for stopping by!

Alina Oswald is a writer and photographer published nationally and internationally, covering LGBTQIA, HIV and AIDS, and COVID-19-related stories. She is the Managing Editor of A&U--Art & Understanding Magazine and the Arts Editor of Out IN Jersey Magazine. As a photographer, Alina Oswald works with small businesses and business professionals, covering portraits, events, and promotional photography. As a teaching photographer, she teaches and mentors teen and adult students. For more details, contact her at alinaoswald.com. View all posts by Alina Oswald