Yesterday, those of us living in NYC area got to watch the solar eclipse, a partial solar eclipse that is, mostly through layers of thin, and at times thick clouds. While I did not appreciate the thick clouds, the thin ones added a certain dramatic element to the experience. A unique experience to say the least, but, in my own humble opinion, not as dramatic as I would have expected it to be. Nonetheless, I’m glad that I got to witness it, and also photograph it.

There was no “moment” of silence or of darkness or of wind quieting down and animals starting to act differently. To be fair, there are not many animals in the NYC Metro area, but still…. I think that that much anticipated moment just didn’t happen, in part because it was a partial eclipse.

I found myself staring at the sun and moon through the solar eclipse glasses, binoculars or lens filters (thanks B&H!) and having a bit of an out-of-body kind of experience, in a way. I was watching this unique phenomenon unfold, in real time, while, also in real time, I was trying to focus on photographing the event. Especially during those few hours of the eclipse, our tasks here on Earth seemed minuscule, unimportant, and yet still intrinsic to our lives. We, as inhabitants of this planet–together with our worries and struggles and happy moments–seem minuscule and somehow unimportant, just a small, tiny part of the universe. Events like yesterday’s eclipse tend to put things into perspective.

But, a tiny part of the universe or not, (and also clouds or not), I did get to photograph the partial eclipse as it crossed the Garden State sky.

Here’s a picture, in color (blue) and black-and-white of “the first bite” the firs moment the moon starts covering the sun. The images below and most of the images taken during yesterday’s eclipse were photographed through a Lee solar eclipse filter. 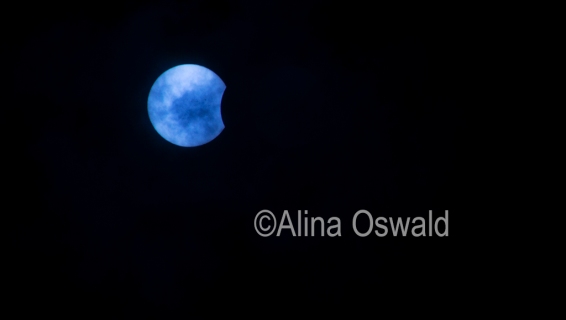 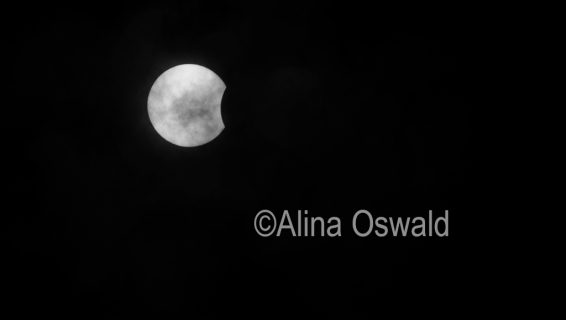 As I write this, I’m also just starting to look through the solar eclipse images from yesterday. Here are a few, with more to be added very soon.

Alina Oswald is a writer and photographer published nationally and internationally, covering LGBTQIA, HIV and AIDS, and COVID-19-related stories. She is the Managing Editor of A&U--Art & Understanding Magazine and the Arts Editor of Out IN Jersey Magazine. As a photographer, Alina Oswald works with small businesses and business professionals, covering portraits, events, and promotional photography. As a teaching photographer, she teaches and mentors teen and adult students. For more details, contact her at alinaoswald.com. View all posts by Alina Oswald